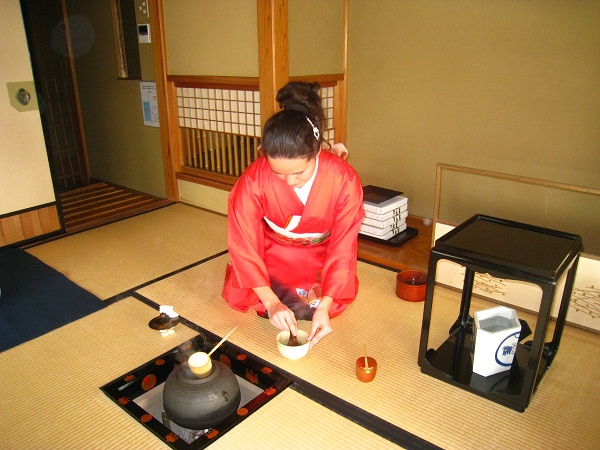 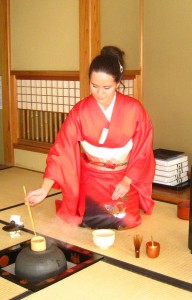 For those looking to experience traditional lifestyles and culture, I strongly recommended travelling outside of Japan’s big cities. For example, what about Shimane Prefecture’s capital, Matsue City? As former castle town, the area surrounding the still-standing structure is brimming with traditional buildings, such as former samurai residences, it feels as though you have warped back to Japan’s Edo Period. Walking around you can also find numerous matcha green tea and Japanese confectionery cafés and shops. In fact, Matsue’s culture of tea ceremony and sweets is so rich that it is known as Little Kyoto.

There are apparently more than ten different schools of tea ceremony practiced in Matsue. For example, the Soshin-ryū, the Sansai- ryū, the Ogasawa-ryū, the Fumai-ryū, the Uraku-ryū, the Omotesenke, the Hōnen-ryū, and the Urasenke styles are all popular. Of these, the Fumai-ryū style is famous for being a locally invented one. The person who begun this style of ceremony was called Harusato Matsudaira, the 7th feudal lord of the Izumo-Matsue Province. 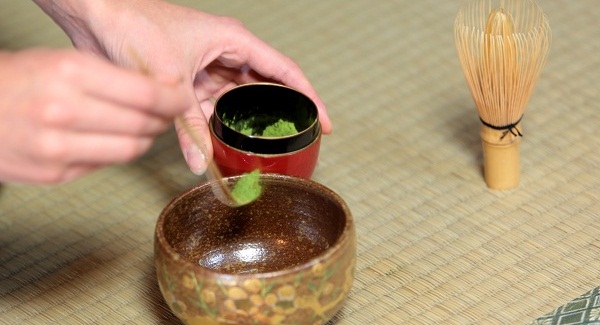 The Matsue Castle Grand Tea Ceremony is held every year in October and allows visitors to experience all of the aforementioned styles of tea ceremony. Each style sets up a booth somewhere in the area surrounding the castle and welcomes guests warmly with matcha green tea and traditional Japanese confectionery. To enjoy each style of tea it would probably take approximately the two full days of the event. To celebrate 2013 being the 30th anniversary of the Grand Tea Ceremony, in addition to the regular two day event, there were special anniversary events in October and November at the Matsue History Museum, in the Shiomi-Nawate area, and on the Horikawa Sightseeing Boat Cruise. It was a revertible tea ceremony paradise! 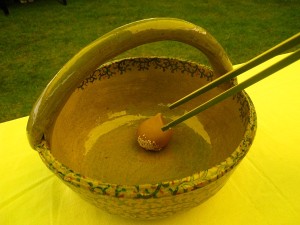 I’ve had an interest in Japanese tea ceremony since I was little, even presenting about it at school once. When I first learned I was going to Matsue, I was very glad to hear that I was moving to a city deeply involved with tea ceremony. When I arrived I began attending an Omotesenke school near my apartment. Practice occurs in the tea room of the traditional house owned by the teacher, Ms. Sasaki. She has all the items required to successfully complete a tea ceremony and prepares tea cups for our practices and scrolls and flower arrangements for her alcove in the tea ceremony room to match the seasons. For example, in early spring she provides cups emblazoned with flowering plum blossoms. When I go to the house each week, I look forward to discovering what pattern will be on my cup and what will be written on the scroll. 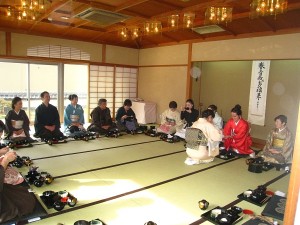 There are about four or five other students in the class and we each take it in turns to perform the ceremony. While one student is performing, the rest of us act as witnesses. It takes about three hours for each student to have their turn. We mostly remain still, sitting seiza with out legs tucked neatly away while we watch. The first couple of times I went, I found it boring and would get sleepy, but I quickly learned the true value of the ceremony and now enjoy the time being still by meditating.

In January of this year I participated in hatsu-kama, the first tea ceremony of the year. I wore a kimono, performed the ceremony and was treated to special traditional New Year’s foods.

Through learning tea ceremony, I have come closer to understanding Japanese culture, Japanese aesthetics, courteousness, subtly, and the ceremony’s connections to Buddhism.

I hope to see you all in Matsue soon! Come try out some tea ceremony culture!