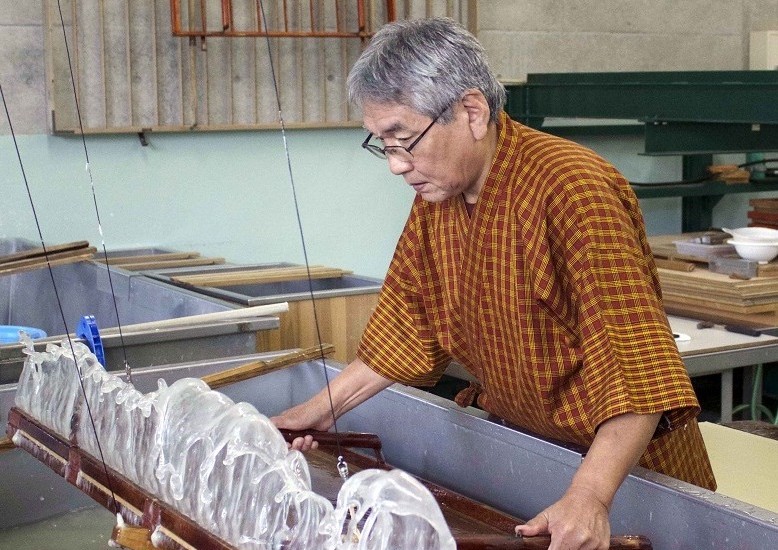 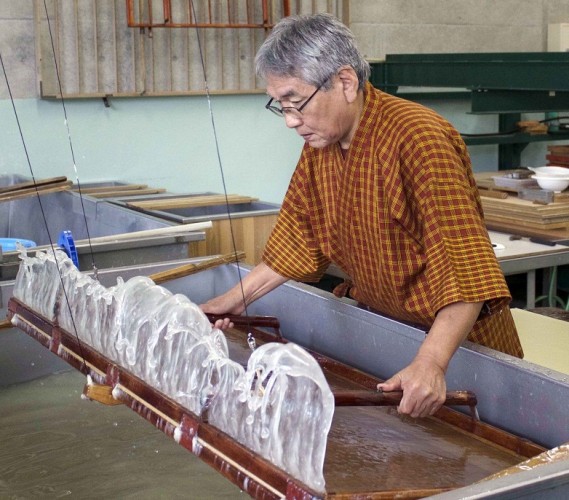 In 2014, another tradition of Japan was announced to be a UNESCO intangible cultural heritage. Sekishu-banshi, which had already been designated on its own in 2009, was listed again; this time along with “Hon-minoshi” of Gifu Prefecture and “Hosokawa-shi” of Saitama Prefecture as a technique for making Japanese paper, called “washi.” You might wonder why paper can be designated a UNESCO cultural heritage, so allow me to explain about Sekishu-banshi, washi which is produced in Shimane Prefecture.

Sekishu-banshi is made using traditional wooden equipment and fibers from one of 3 types of trees called “kozo”, “mitsumata”, or “gampi”. The origin of the creation process is not clear, but in Shimane’s Iwami region this technique has been preserved for over a thousand years. In this region, the production processes; planting trees, breaking the bark into fibers, removing impurities, and ending as a sheet or other shapes are all done by hand. The creators’ works are truly complete when their products are integrated into people’s daily lives. 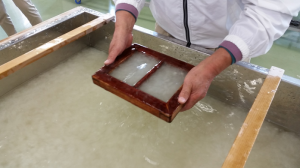 Washi is very different from paper we use every day. When you try ripping a sheet of paper, it is easily torn apart. On the other hand, washi is very strong and you will find it harder to rip. The strength comes from its ingredients; fibers from mulberry trees called “kozo”. Kozo trees cultivated in the Iwami region are called “Sekishu-kozo,” and the fibers are relatively long, thin, and shiny. They form a complex web in the production process, and as a result the paper becomes very strong and resilient, resisting being torn or ripped even if it is crumpled or folded. 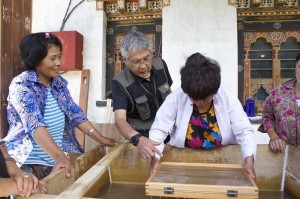 Another remarkable feature of Sekishu-banshi is that its technique is highly regarded overseas, the craftsman association has engaged in technical exchange with the Kingdom of Bhutan. Ever since one of the craftsmen was first invited to Bhutan to teach the technique in 1986, they have accepted 22 JICA Overseas Trainees from Bhutan in the past 28 years. In 2014, three trainees from Bhutan came to learn the skills of Sekishu-banshi.

In order to preserve the techniques and knowledge of this tradition, Sekishu Washi Center was built in 2008 and it also has a detailed website written in English so you can learn more about the creation process as well as how long it takes to complete a sheet of Sekishu-banshi paper. The facility has a studio where visitors can experience the entire making process, and we recommended creating your own special Sekishu-banshi paper.
Mr. Kubota, one of the Sekishu-banshi craftsmen, proudly said “Sekishu-banshi can last for hundreds or even a thousand years, so it has been often used to preserve important documents throughout the area, even in countries overseas”. The craftsmen’s name cards are made with Sekishu-banshi, giving the cards a flexible yet strong structure as well as a pretty shine. 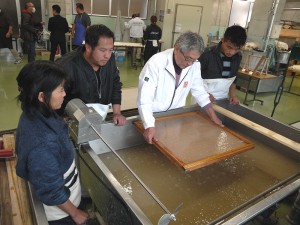