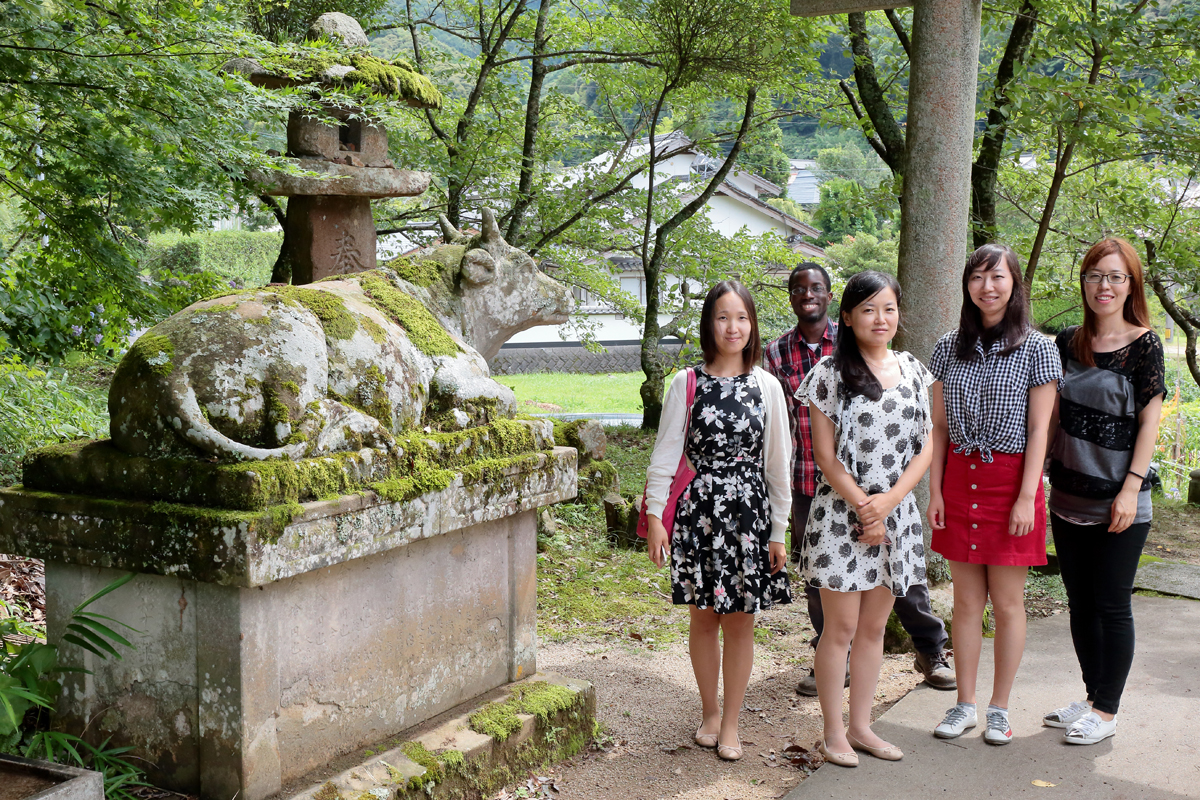 This time we learned about “Kimachi stone” and “Izumo-nankin,”a type of goldfish, which could be considered part of Shimane Prefecture’s original brand.

Kimachi stone is a sandstone mixed with hardened volcanic ash that formed around 14 million years ago and can only be found in the Kimachi district of Matsue City .

As a result of kimachi stone’s softness and high quality compared to other stones, kimachi stone has been used for a variety of stone works. The most famous of stone works is the Izumo stone lantern, a nationally designated traditional craft, the stone coffins of the Kofun period, stone pagodas from the Middle Ages, stone Buddhist statues, millstones, stone furnaces used for cooking, and gravestones show how kimachi stone was a widely used tool within daily life.

What is great about kimachi stone is that as time passes and it is affected by the wind and rain, it gains a sense of refined dignity and beauty referred to as “sabi” within tea ceremonies.

Though I had thought of something old as something that was only dirty and not that impressive, I feel that through living in Japan and my personal experiences has allowed to me to understand the distinct Japanese concept of beauty, “sabi,”a little more. 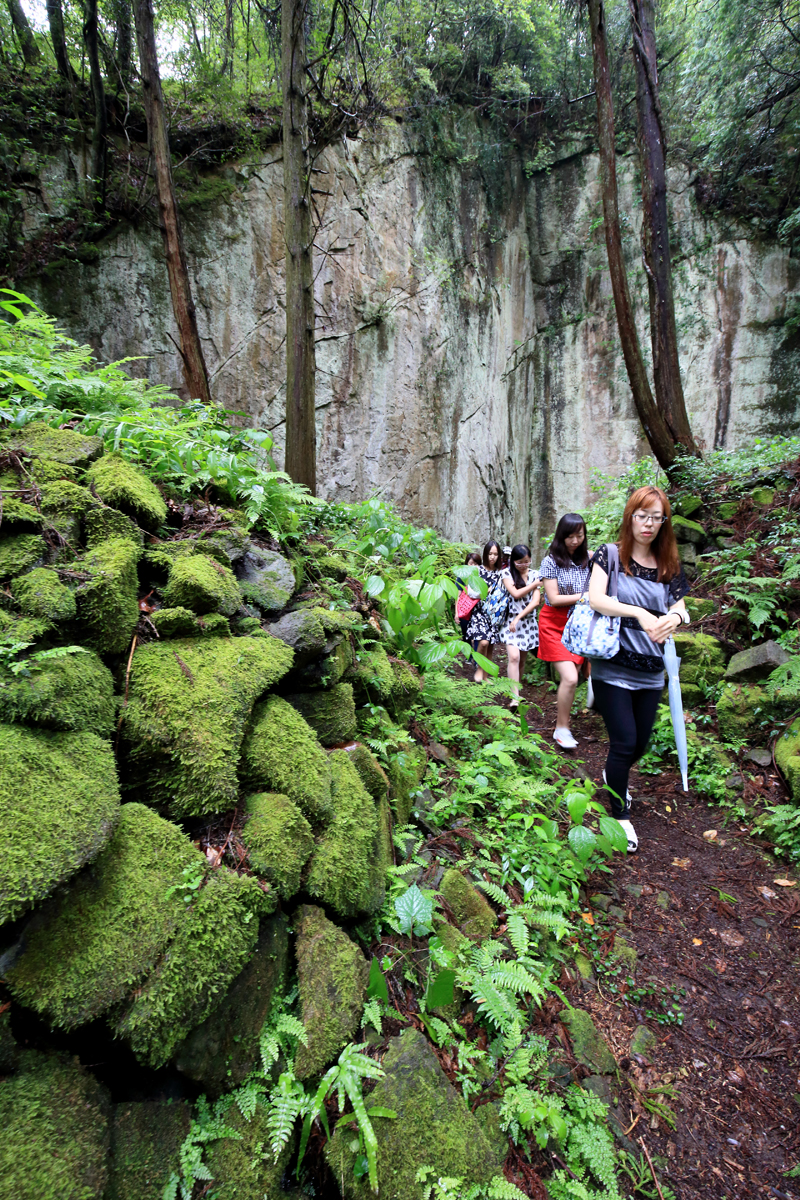 In the morning we learned about the history of kimachi stone while looking at the exhibitions within the Kimachi Stone Museum, and then we created our own stone carvings. Even though kimachi stone is comparatively softer than other stones, it is still a stone; though we carved for a just a bit over an hour, my fingers and wrists hurt for while after it was done. It might have been because I put too much energy into making a gift for a close friend. 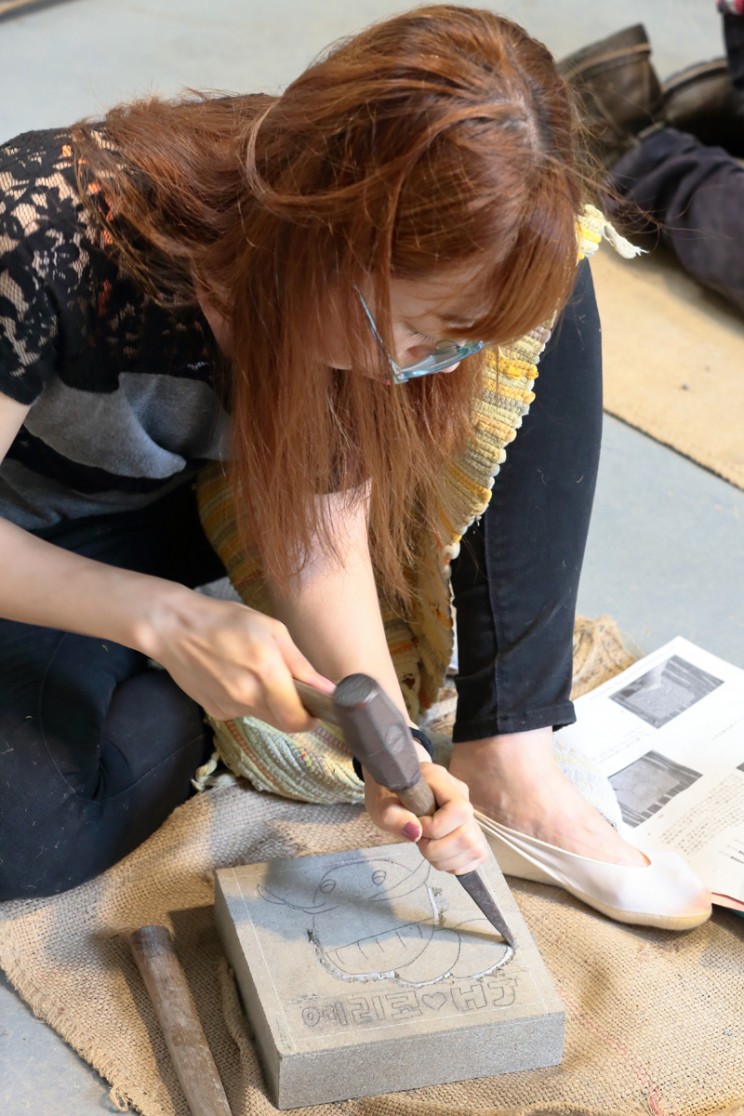 Next, we went to learn about another thing that is original to Shimane: “izumo-nankin,” a Maruko fish (a species of primitive goldfish called “ranchuu goldfish” with no protrusions on its head). The person who spoke to us about izumo-nankin was none other than the chairman of the Shinji Kingyo Association, Mr. Takeo Shimizu. We were able to visit his home and listened to his explanation while taking a look at his izumo-nankin.

The izumo-nankin is a living natural treasure. If I were to explain it in more detail, it appears that it is not the whole species that becomes a living natural treasure, but the members of the species that are selected for having a high rating at a competitive show in Matsue city that is held on October every year.  Even though the period that the particular izumo-nankin are recognized as a living natural treasure is no more than a year, the best award-winning fish that have earned the special honor 3 times in a row are highly appraised, given a title, and are recognized as a famous fish that will have its name remembered in history.  When I asked if there is any prize money for winning, he responded with “the only prize is honor.” Since one does not need any permission to own goldfish, one can easily have his own goldfish. You could also enter the goldfish in the competitive show, though there is no prize money, and you won’t receive support of any kind in taking care of the fish, even if they win. As a hobby, it sure is expensive. 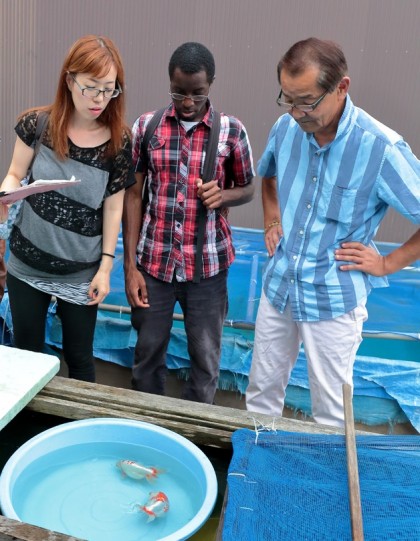 Characteristics such as a small, smooth head with no protrusions, no dorsal fin, a four-ridged tail, the long and narrow area before its eyes, and narrow width of its eyes are given as other examples of the physical appearance of the izumo-nankin.

At competitive shows, the “small lips, narrow width of the eyes, as well as the long, narrow area before its eyes, and round abdomen that spreads out evenly left and right,” i.e. the physical features that form a line from the foremost portion of the mouth to the abdomen, are highly regarded as the ideal appearance of an excellent, high ranking izumo-nankin.

I wonder if I am mistaken in thinking that the life of an izumo-nankin leisurely swimming around in the kimachi stone fishbowl is the most relaxing in the world.

Dear readers, how about experiencing creating your own kimachi stone carving and giving it to that special someone? 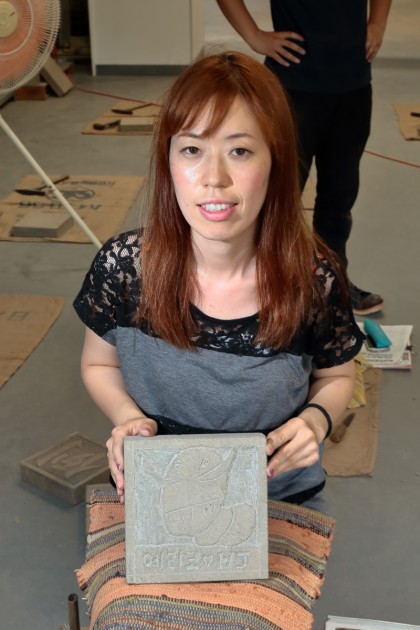