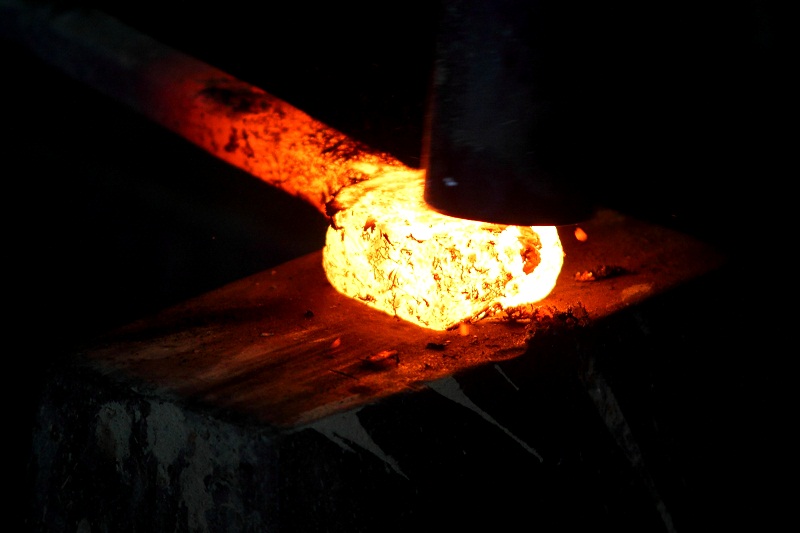 If you are fond of Japanese swords・・・

If you ask a foreigner “What is Japanese culture?” you will most likely receive an answer like “Sakura, geisha and samurai”. The image of Japan as seen from abroad is often that there are samurai from the period of warring States still walking on the streets. So, here we come to the main question ‒ what is it that makes an ordinary warrior a samurai? The answer is ‒ the samurai sword, the katana. 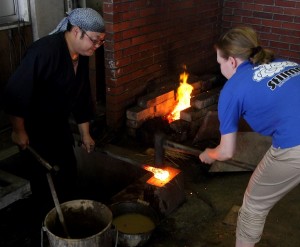 Who amongst us has not heard of the fearless heart and the strong power of the Japanese samurai? Above all things they valued a true heart, courage, beauty and the sword as the essence of all. The first Japanese sword is said to have been the Kusanagi-no-tsurugi, which came out of the great serpent Orochi’s tail when he was slain by the deity Susanoo. As time has passed, the Japanese sword has undergone some changes in the shape and composition of its metal blade. It is arch-shaped, and its main characteristic is that it “won’t break, won’t bend, cuts well”. 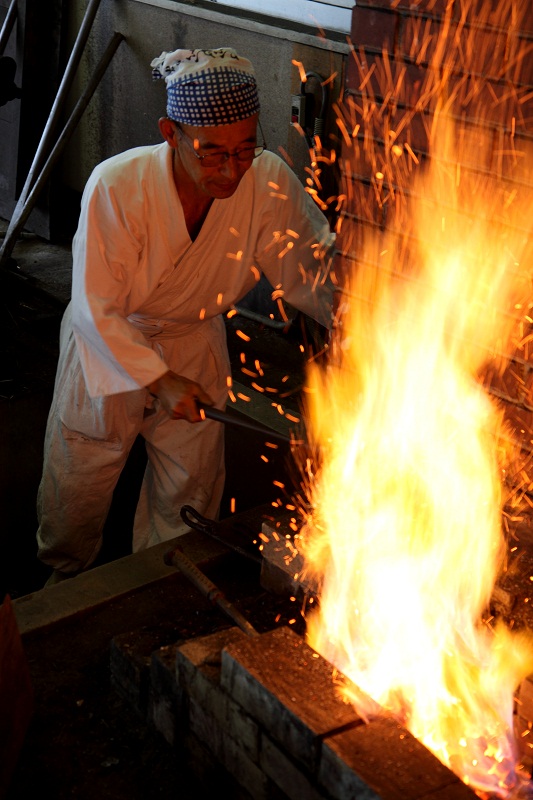 The curve of the blade is naturally made when the hot metal is put into cold water. A katana can only be made with the tatara produced iron, so it is very convenient to have a blacksmith and an iron-making workshop close to each other. We met the local sword smiths, the Kobayashi brothers, in Okuizumo at the “Tatara and Japanese Sword Museum” to see the process of forging swords and learn more about the modern katana business.
The Kobayashi family is well known in Shimane Prefecture, with a history that dates back to the Edo Period (1603-1868). In total, there are three main families famous for producing swords in Shimane. They cherish the old traditions and are proud of not changing the essence of sword forging. Mr. Rikio Kobayashi laughed that the only difference between the Middle Ages and now is that now we are blessed with electricity. It is hard to fully comprehend the backbreaking labor of a black smith until you try to pick up the hammer yourself.
By pulling the incandescent chunk of iron out of the 1400 degree Celsius forges’ flame and pouring some cold dirt on it to create a coating, you make the metal melt faster. 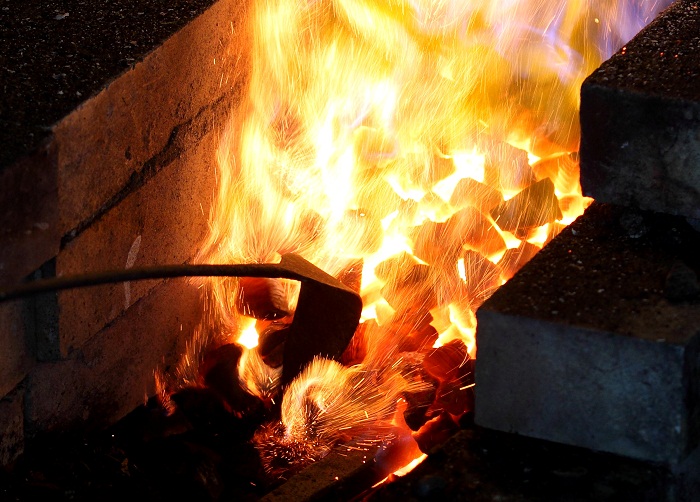 Then pushing the chisel in the middle to fold it and hammer it twelve to fifteen times to stretch and insert it back into the forge. Then, repeat the process many times. At most, twenty-four Japanese swords are produced here each year, or two per month, with an average cost of one million Japanese Yen each. The sword smiths only start to produce a katana after an order is placed, so while it might be unusual, but it is not a case of dropping into the store nearby and choosing any sword you like. Each customer must have the patience to wait for around one year for their sword to be completed. 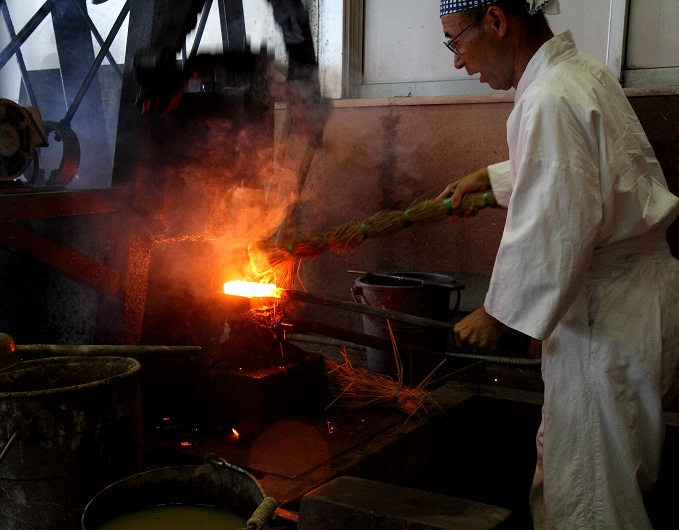 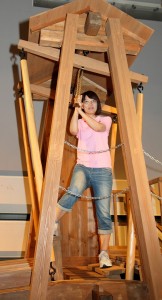 Have you ever seen the film ‘Princess Mononoke’, directed by Mr. Hayao Miyazaki? I doubt there are many people who know that Iron Town, the town where the men and women work together to make iron in the heart of the mountains in that film, is a part of Shimane Prefecture. In mid-July, the heart of summer, in order to learn about the ancient Japanese tradition of ‘tatara’ I head towards Okuizumo Town, Nita-gun of Shimane Prefecture. ‘Tatara’ is an ancient Japanese iron-manufacturing method where charcoal and iron sand is put into a fire pit made of clay and blown on with a bellows. This method produces an extremely pure end product. In the modern age, it is only Okuizumo Town where the tradition of tatara continues. The requirement that real Japanese katana swords use tatara steel to be effective is the reason this tradition lives on in an age when manufacturers must mass-produce it in order to remain competitive.

We head toward the Okuizumo Tatara & Katana Museum, about one hour from Matsue by car. Upon arrival the first thing I saw was a monument depicting Yamato-no-Orochi, a terrifying eight-headed, eight-tailed serpent of myth. Just as I wondered why they would have such a statue here, we received explanation from our guide. It is there because, according to Japanese myth, when the deity Susanō-no-Mikoto killed Yamato-no-Orochi, an iron sword came from the last tail that was sliced off. 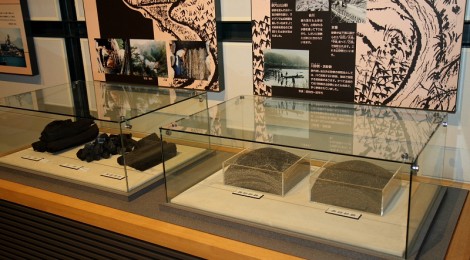 The Okuizumo Tatara & Katana Museum is a one-storey building with an exhibition room and an arena for practicing swordplay. The exhibition Ko Yunheerooms contain videos and panels detailing tatara, charcoal and iron sand (which are the ingredients of tatara), the bellows and fire pits used for making it as well as iron and steel made using the tatara method. Iron sand is just what it sounds like ‒ iron found in grains of sand. I learned, however, that from one kilogram of granite the amount of iron that can be extracted amounts to a measly four grams. Japan’s Chūgoku Region, rich in iron sand and charcoal, was a befitting place for tatara to develop and the area used to thrive on iron production. While walking around the museum, the thing that interested me most was a life-size model of the clay fire pit and the large bellows used to blow air on it. It was interesting especially because you could try out using two different types of bellows: one operated by alternately pressing down with each foot and another where there were two people standing on parallel pumps. It required more strength than I thought it would and thinking about how the workers had to continue for many hours at a time, I thought about what a difficult job it really must have been. The rectangular-shaped fire-pit’s area was a little larger than a Japanese bathtub, but it was actually a hole dug three meters deep. The hole has features to keep it insulated and retain heat as well as keep moisture out. 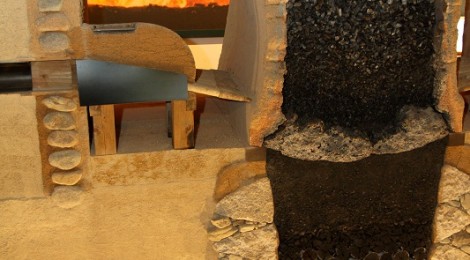 These features were also on display in the exhibition. I was surprised to learn that the fire-pit and the materials used in tatara have not changed significantly since ancient times. It seems the biggest changes have been in the size of the pit and the method for getting air to flow into it. I also learned that this skill likely came to Japan from Korea, originally. Shimane and Korea have had a strong connection for a long time, I suppose. Tatara production methods, which were once conducted one-hundred and eighty times per year, did cease at one point for a time. However, with the government’s encouragement, it was reborn here and is now conducted around three times per year. I suppose this is because there were hard-working people who wanted to protect, preserve, and pass on this tradition to the next generation.