Traditions and Culture in Oki Islands

These small and remote islands are home to an incredibly rich and diverse culture that stretches back to ancient times. Isolation and mountainous terrain has helped form and preserve unique culture and identities around the islands. Much of the typical Oki culture can be observed in everyday life on the islands; including the sights, sounds, food, industries and so on. However, if you time your trip right you may also get the chance to see one of the many unique festivals or celebrations of Oki.

Oki Kokubun-ji Temple Site  – April 21
Renge-e-mai（蓮華会舞） is a performing art that takes place every 21 April originated from bugaku, ancient court dances that were popular during the Nara (710 – 794) and the Heian Periods (794 – 1185). The dances are of South-east Asian origin and are performed with bright and unusual masks. Each dance tells a story. Today there are only seven related traditions remaining in Japan, including Renge-e-mai. It is designated as an Important Intangible Folk Cultural Property of Japan.

Traditionally, sumo was a religious practice performed as an offering to the gods on auspicious occasions. This form of ceremonial sumo was prevalent in the Edo Period (early 17th – early 19th century), and has been preserved as an important social and religious event here in Oki. Oki Traditional Sumo takes place when a significant event has occurred, such as the replacement of a shrine roof, or the establishment of a new facility. Events are island-wide and are 24 hour-long. 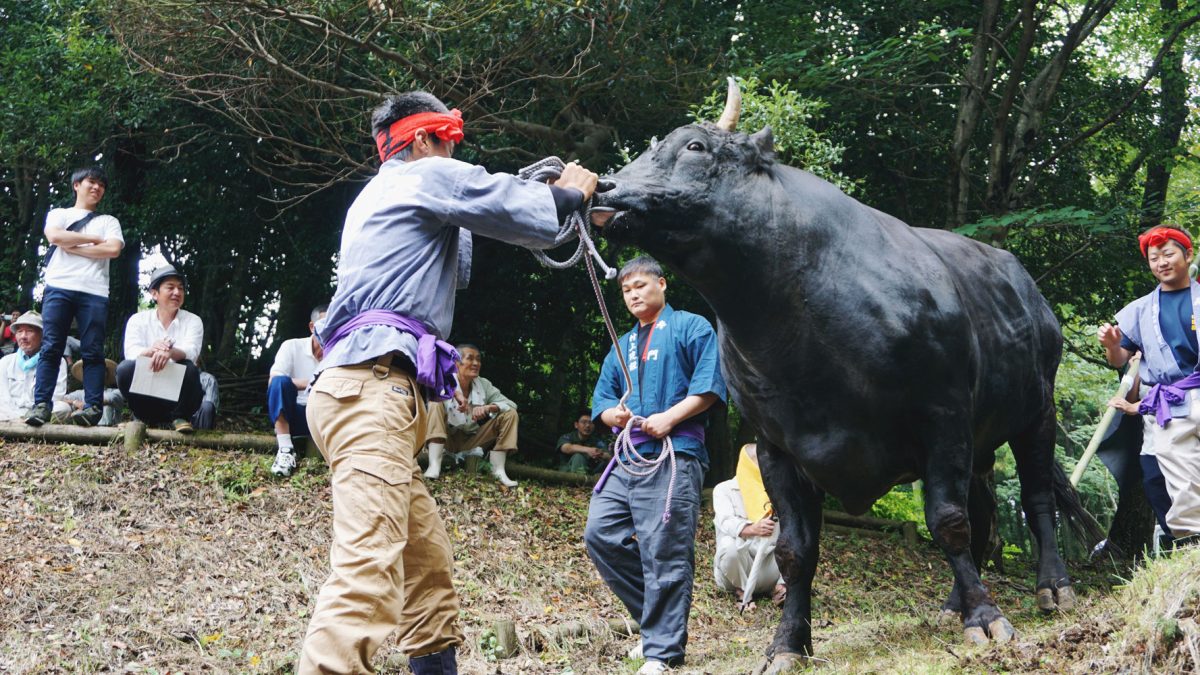 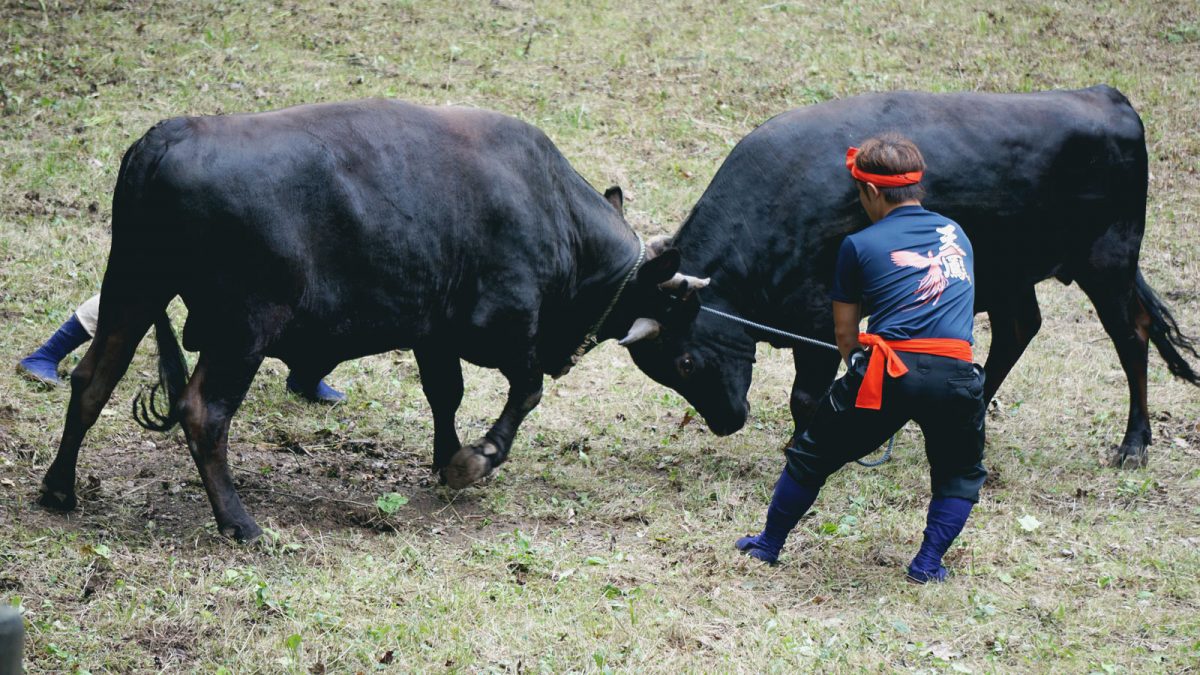 It is said that Bull Sumo was introduced to the Oki Islands to entertain Emperor Gotoba, who was exiled to the Oki Islands following his defeat in the Jyokyu War in 1221. Bull Sumo is steeped in Shinto ceremony and is an exciting event held a number of times throughout the year. Bull Sumo is so-named because of its similarities to Sumo; including the rank of the bulls, Shinto rituals, and the nature of the match. The winning bull is decided the moment the opposing bull turns away from the fight and the bull keepers prevent either bull from becoming injured.
*Please refer to the Oki Islands Event Calendar for information about when Oki Bull Sumo tournaments are held. 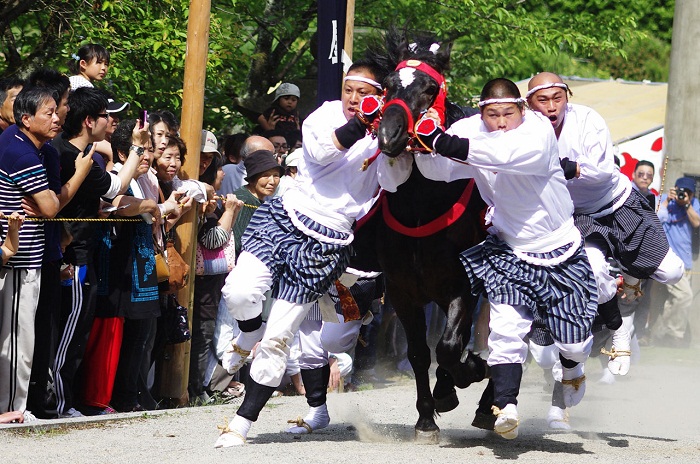 Tamawakasu-no-mikoto Shrine  – June 5
Gorei-furyu Festival is one of the most significant festivals on the Oki Islands. It takes place at Tamawakasu-mikoto Shrine which is the main general shrine of the islands. The highlight of the festival is called uma-ire, a majestic event wherein horses carrying the gods of the shrines of different regions around the island gallop up to the shrine entrance. The festival takes place to pray for a good harvest that year and many other rituals such as yabusame (horseback archery) and rice-planting rituals take place. It is said that in the past, horses from up to 48 areas, including the Dozen Islands, visited the shrine during the festival. 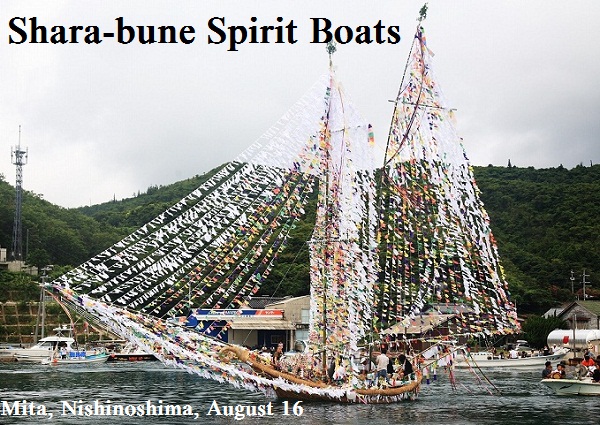 Obon is celebrated all throughout Japan as the period during which ancestral spirits are said to return to their homes. Many places place lanterns laden with lights and offerings to symbolise the return of the ancestors following Obon. In Nishinoshima Island the tradition is quite different. Instead of lanterns, ancestors are bid farewell with Shara-bune. These are medium to large-sized wooden boats laden with offerings. The sails are made with Buddhist sutras written on paper that cast a very pretty sight on the water when the boats are launched. It is thought that the word shara is derived from shoryo, which means ‘spirit of the deceased’. 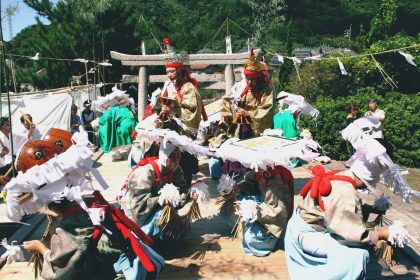 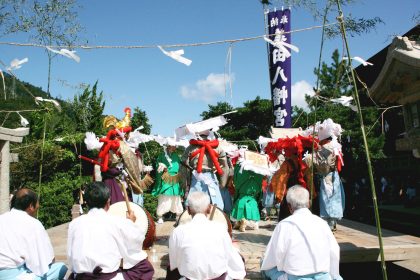 Mita-hachimangu Shrine (Nishinoshima) – mid-September (odd years)
Hiyoshi Shrine (Nishinoshima) –  mid-October (even years)
During these events, Shinto dances called shuhaira (meaning ‘to worship in ten directions’) are performed. These performances have been designated as an Important Intangible Folk Cultural Property of Japan. It is uncertain when these dances began, but according to documents about the religious festivals, it was already being performed by the end of the Muromachi Period (1336-1573). The rhythm of the drums and chanting while dancing is very intriguing. 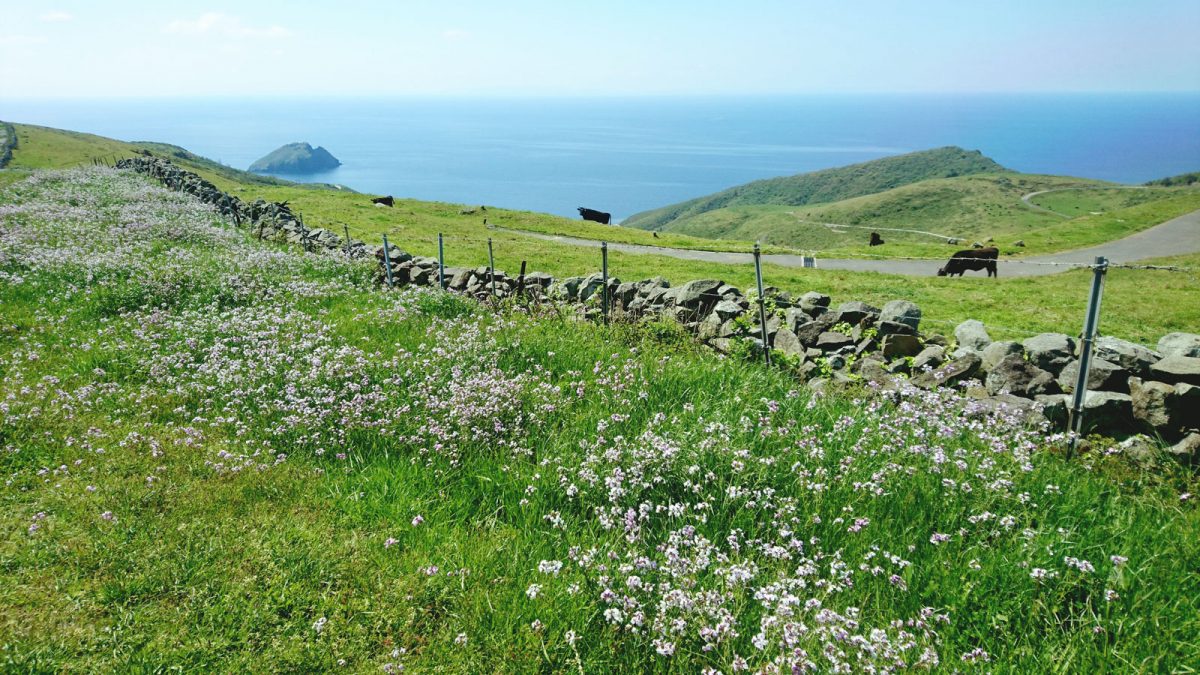 Makihata is a unique crop and stock rotation farming method that was developed in the Oki Islands during the Middle Ages. It was carried out extensively on the islands, in particular on the Dozen Islands, up until as recently as 1970. Makihata was developed as a sustainable method of food production for the isolated islands. The volcanic land is characterized by a highly mountainous landscape and little arable land. In order to combat this, most of the land, including high mountainous areas, was delineated into farmland for makihata. This farming method consists of a 4-year cycle in which cattle, beans, millet were rotated. Remains of makihata walls and free-roaming cattle on the mountains have become a quintessential part of the spectacular coastal views in the Dozen Islands, especially the smallest one – Chiburijima.

Obsidian is found on Dogo Island. Though remote and small, archaeological remains that date back to over 30,000 years ago indicate that people were either inhabiting or visiting the islands since ancient times. The reason for this is the presence of obsidian on the islands. Obsidian is a glass-like volcanic rock that was a highly valuable resource used to make sharp and effective stone tools in ancient times. Obsidian trade from Oki was widespread and particularly concentrated around the Sea of Japan coastal regions. As well as providing evidence about the spread of culture and ancient history of the islands, obsidian tells us about the volcanic processes that formed the islands.