=Report= How I Made My Buckwheat Noodles, the Oki Islands Way 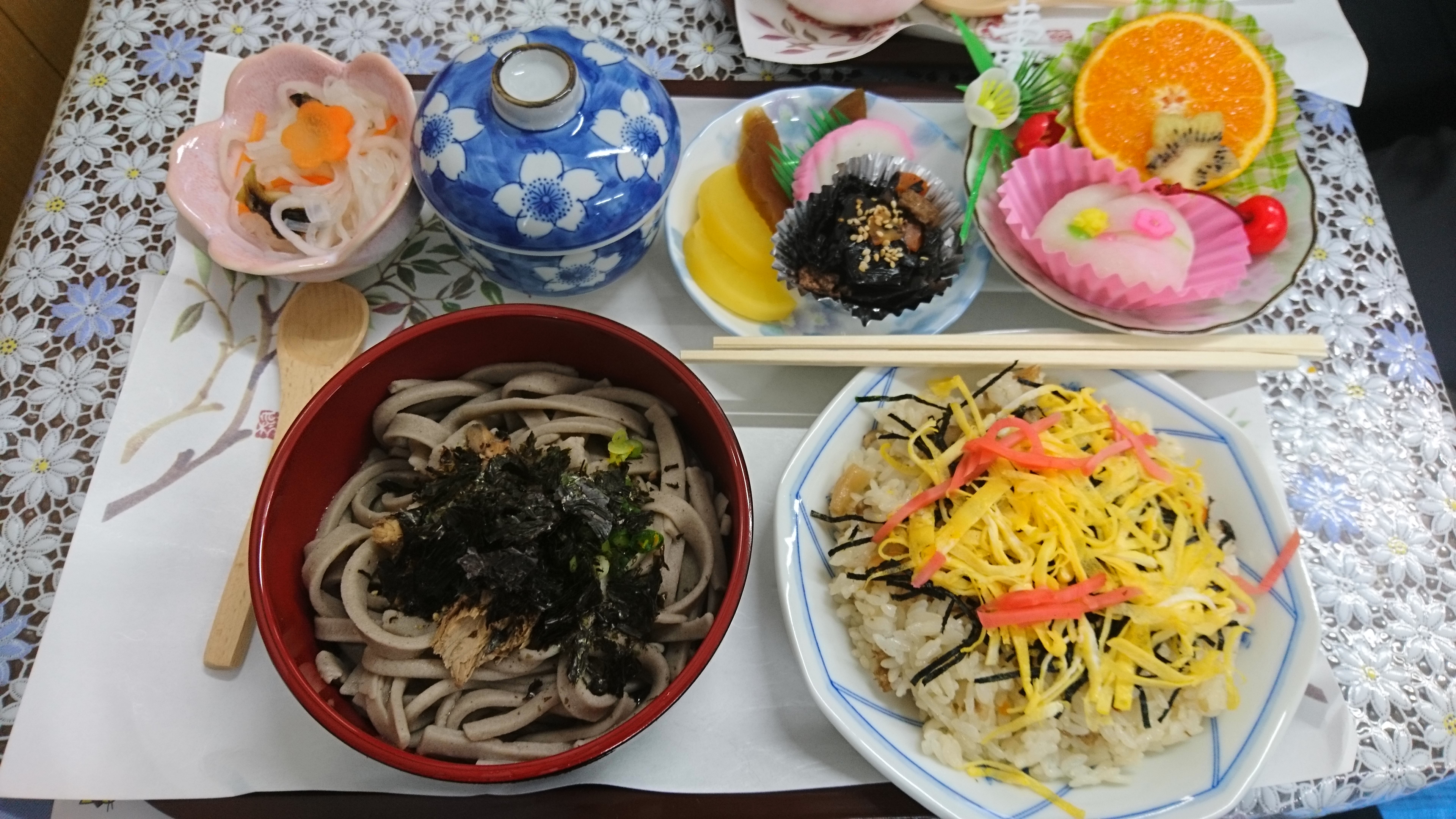 Light brown in colour and made with buckwheat – that is soba, a type of Japanese noodles, in a nutshell. And yet, depending on the region of Japan, there always seems to be something different about them somehow, be it a change in ingredients or the way they are served in a dish. The people of the Oki Islands also developed their own variety, distinctive from better-known buckwheat noodles of Izumo. I participated in a two-hour-long soba-making workshop in Okinoshima Town (Dogo Island). I’m confident that local culture can be explored through food and no better way than through hands-on experience. I wanted to learn how to make the noodles from scratch and find out what exactly is so different about Oki soba. 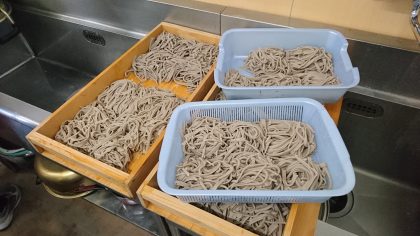 The workshop I attended opened with a short lecture. The teacher explained what ingredients we will use. Usually, wheat (or another glutinous agent) and buckwheat flour are mixed together to make a dough that yields long and elastic noodles. The islanders, however, seem to prefer their soba thick and short, for they use buckwheat flour only. They pour hot water on it and then proceed to energetically knead the dough. That part requires a bit of a muscle, so people not used to such tasks might take some time. The workshop participants took turns trying their hand at it. 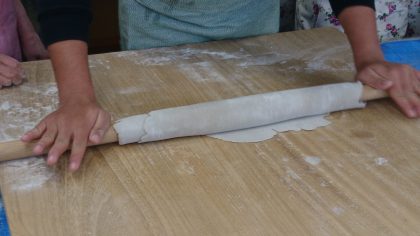 Once the teacher deemed the dough ready, we grabbed wooden boards and rolling pins. We rolled the dough out in every direction, as instructed, but this can only flatten it so much; for our noodles, it still needed to be wider and thinner. To my amazement, the teacher wrapped the dough loosely around the rolling pin and like that rolled it out some more. Satisfied with the result, she folded it a few times and showed us how to cut into noodles. That was the part I found a bit tricky. We don’t want our soba too thick, but cutting it thinly might result in noodles falling apart; even more so, as they have been made without wheat flour. 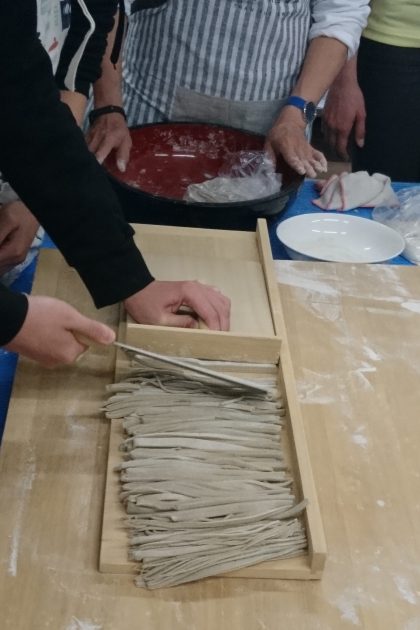 The first batch of freshly cut noodles went straight to the pot where it boiled for a few minutes. Then it was transferred with a huge ladle, handled expertly by our teacher, to a bucket filled with cold water. As instructed, I delicately washed the noodles. Then, I fished out a handful and put them on the board. That handful, as it turns out, would be one serving of soba. 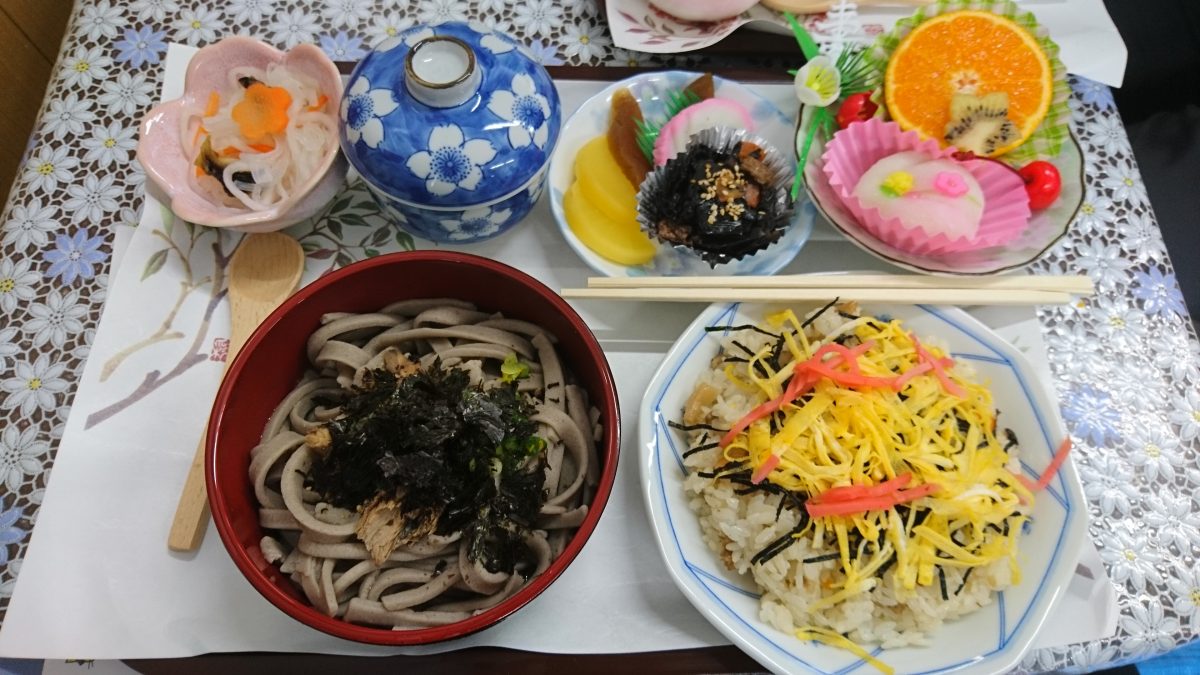 Finally the part all the participants were looking forward to – tasting the fruits of our labours! Our noodles were served hot in a fish broth with toppings of sesame, dried seaweed, spring onion and yuzu (citrus fruit). I found the texture of my soba pleasantly sturdy and a sip of the broth revealed an intense taste enriched with a hint of citrus. The people of Oki, our teacher explained, eat their soba like that on New Year’s Day and during important family celebrations. And certainly, there was something joyous to this regional flavour adding to the satisfaction of having done the noodles myself.